The purpose of the pilot study was to find out the effects of wind turbine infrasound on the health of the people in the surroundings of wind turbines. The material of the study was collected in Satakunta and Northern Ostrobotnia in Finland (see Figure 1) in spring 2016.

The study was sampled from two (2) different registers by simple random sampling. One register was the customer register of a company in Northern Ostrobotnia, the other was a register of members of an association in Satakunta. An interview method was used as a method for collecting research material. A total of 193 people from 46 families participated in the survey. They came from areas where the wind turbines had been built and started 0.5–3 years before the interview. As the limit of the exposure time was kept three years, and no family with a longer exposure time was accepted to the sample of the study. The distance of each family to the nearest wind turbine(s) as well as the building and starting time of the wind turbine(s) were found out for the interview. Some of the interviewees lived near wind turbines, some at a distance of tens of kilometers.

In addition to that, a map model was developed to describe the exposure zones, in other words the propagation, continuity and magnitude of the wind turbine infrasound, on a map of Finland (see Figure 1). 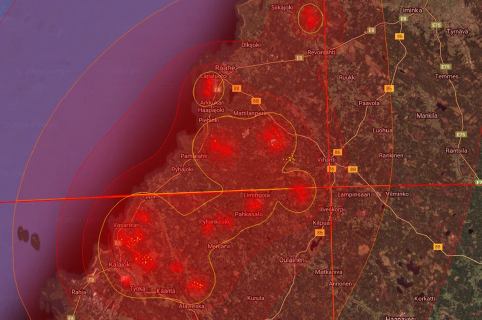 Figure 1. The area in Northern Ostrobotnia is located in the south of Oulu Province in Finland. The wind turbine infrasound is almost continuous in the yellow-bounded area (the zone 1 in the map model).

As the statistical method of the study was used the linear mixed model to test the statistical significance of the research material. The symptoms of the people were explained either by the direct distance (km) to the nearest wind turbine or by the exposure zone of the map model. Other explanatory variables included the register used, the gender and age of the person and his or her awareness in advance of potential harmful health effects from wind turbines. 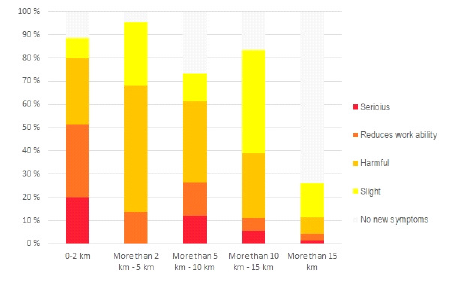 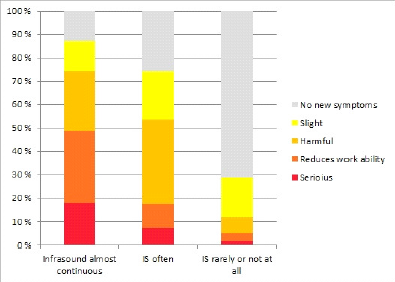 The most typical symptoms were sleep disturbance or change in the need for night’s sleep, fatigue and various pains.

The results of the study show that there were remarkably more harmful health effects caused by the wind turbine infrasound in the exposure zones 1–2 of the map model than further away. The most important result of this study is that the risk distance grows if the height, amount or efficiency of the wind turbines increases or with time in a long-term exposure. This means that the risk distance depends on the circumstances. In the areas with wind turbines around the residental area there were harmful health effects as far as about 15–20 kilometers from wind turbines under the circumstances when this pilot study was conducted.

Thus, the potential damage should be investigated within a sufficiently long radius of the wind turbines, taking into account all wind turbines in the vicinity as well as the most typical wind directions. This study confirms the results of a long-term study of Ceranna and Pilger (2004–2016) about the propagation of the wind turbine infrasound.