“If I were a swindler, if I were committed to committing fraud, I would be in green energy. If you want to trick someone into giving you a lot of money, you have to give them something they really believe in – you have to promise them the future.” (Jeppe Gjervig Gram, writer of “Follow the Money”, The Guardian, March 17, 2016) 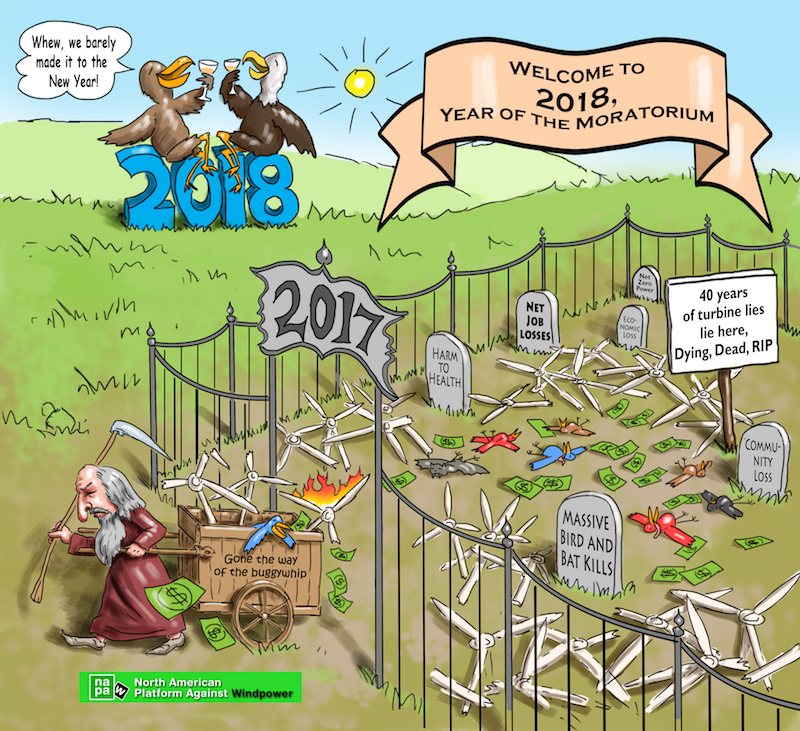 We are calling 2018 the year of the Moratorium. Interesting to note that developers have mentioned they are watching the “move to moratorium,” closely. Renewable Energy Magazine writes that the anti-wind movement is very strong, not going anywhere, and pumps out “hundreds of articles per month, sometimes 20 per day.” It further admonishes developers, “Don't let your wind farm project succumb to delays, moratoriums and zoning defeat.”

This is a small sample list, and we expect 2018 to achieve many more hold-outs and pushbacks, and firm moratoria, bans, prohibitive requirements, setbacks. Let’s not forget this year’s formidable global list of research, writing, and the importance of the recent Australian Administrative Appeals Tribunal decision.

This Season we also salute and bid adieu to Wind Turbinator Number One, Jim Vanden Boogart of Greenleaf, Wisconsin. Jim and wife Barbara are famous world wide for their leadership of Brown County Citizens for Responsible Wind Energy (BCCRWE). Barbara and family, please accept our deepest condolences. It is a tremendous loss to all of us, and we thank you for your tireless work on behalf of victims at the Shirley Project. Rest in Peace. Condolences and memories can be registered here.

To all our warrior friends everywhere, thank you all for your tireless courage, imagination, and dedication. Blessings at this Holiday Season, and Happy New Year! There are too many of you to specially recognize, but you know who you are.